Stanardsville Area Revitalization (*STAR*) originated in 1984 when a community organization, Stanardsville Pride with Action (SPWA), was formed to build community spirit and contribute to community services and activities.  Over the years it raised money and contributed to creation of a small town park, a visitors’ center, local festivals and historic commemorations, and publication of a local history, among other things.  In 2002, the SPWA established itself as a 501(c)(3) organization for tax purposes.  The organization then broadened its focus to include the physical revitalization and economic development of the Town.  SPWA changed its name to *STAR* in 2005 and began a program to revitalize the Stanardsville area.  Since that time it has continued its community activities while also applying for grants to improve its Main Street and encourage downtown business development.

*STAR* works with local residents, the Town of Stanardsville, Greene County, and the Thomas Jefferson Planning District Commission (TJPDC) to improve the economic health of Stanardsville and the surrounding community.  Its motto, “Restoring its Vitality…Retaining its Charm…Helping its People,” captures the purpose and spirit of the organization.

As a tax-exempt 501(c)(3) nonprofit organization, *STAR* is an independent community organization with no legal relationship to the Town of Stanardsville.  However, most *STAR* activities are done in cooperation with the Mayor and the Town Council.

The President and Executive Director of *STAR* joined with members of the County Planning Commission, County Planning Division staff, the Mayor, and TJPDC to form a committee to prepare a new Comprehensive Plan for the Town of Stanardsville.  The plan drew upon several documents previously written by *STAR* and other sources to make substantive changes to the 1998 Comprehensive Plan.   As stated in its Introduction, the Plan is intended to guide future development and growth within the Town for the next 10-20 years, with the purpose of supporting economic vitality and improving the quality of life for all residents.  It was approved by the Town Council in, 2017.  Click here to view the Comprehensive Plan.

Stanardsville has a population of approximately 400 people, and the Town and surrounding area are estimated to include about 1,500 people. Median household income in the area, at $26,500, is less than half the median income for Greene County and for the state of Virginia.  Seniors make up 41% of the population and minorities are about 21%. 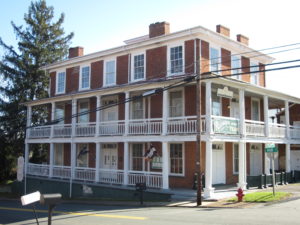 Stanardsville is a historic town with numerous historic buildings and structures, far more than most other small towns in Virginia.  It was designated a Historic District in 2004, largely because of its Courthouse, the Lafayette Inn, County Jail, its two buildings dating to the late 18th century, and over 160 other contributing historic structures.  It is included in both the Virginia and National Registries of Historic Places.

The Town is a key gateway to the Blue Ridge Mountains and an attractive destination for people seeking local history (the homes of Presidents Jefferson, Madison, Monroe, Taylor, and Wilson are nearby, as are several Civil War battlefields) and outdoor activities (hiking in the Shenandoah National Park, biking, fishing, antiquing, visiting local wineries, etc.). 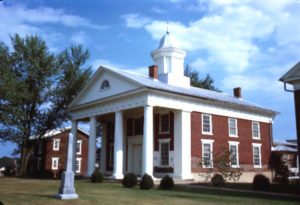 *STAR*, working with the Town of Stanardsville and Greene County, has been successful in applying for federal TEA-21 grants to provide for needed streetscape improvements.  As Project Manager, *STAR* was awarded grants totaling $674,000 for the improvement of Main Street and $52,000 for crosswalks between the nearby school complex and shopping center.   That construction project was completed at the end of 2013.

VDOT subsequently awarded three grants totaling $918,000 for a Phase II streetscape improvements project.  That project will extend the sidewalks on the north side of Main Street to the shopping center on the west side of town and to the pharmacy on the east.  Construction is expected to get underway in late 2021.

STAR also managed implementation of a $1 million Community Improvement Grant awarded to the Town by the Department of Housing and Community Development.  That recently completed grant project restored historic buildings on Main Street, upgraded low-income apartments, removed blighted property, and built the pavilion and stage behind the County Administration building.

In addition to administering grant programs, *STAR* is involved in various community support activities to help build community spirit and encourage continued support of *STAR*’s efforts to revitalize Stanardsville. It has been a conduit for supporting and creating local organizations, such as the Art Guild of Greene, the Blue Ridge Heritage Project and Greene County Memorial, and the Greene Commons Group to manage operations of the new pavilion and stage.

All of these activities are conducted in full cooperation with the Town and with regular input from the community through public hearings and individual meetings with Main Street property and business owners.  Indicative of *STAR*’s broad-based community support is its Board of Directors, which includes ex officio representatives from the Town, the County, the Chamber of Commerce, the Economic Development Authority, and the Historical Society, in addition to elected public members.

*STAR* will continue working to help fulfill some of the long-term needs of the Stanardsville area, especially attracting new businesses, developing unused properties for mixed-use buildings, and encouraging appropriate residential development in the Town.