*STAR*, working with the Town of Stanardsville, has applied for and received $2.8 million in grants awarded over the past 15 years to support revitalization projects in Stanardsville. They fall into three categories: Streetscape Enhancement, Downtown Revitalization, and Community Development. A summary description of those projects and a list of the 28 grants received to date can be found here: STAR – grant projects desc.

Visual images best illustrate what these grant projects have accomplished.  A portfolio of before and after photos can be found here:STAR Grant Projects_2009-2019_Final(2)

The grant funds have been used for:

* Facade improvements to historic buildings on Main Street. For example, the two buildings at corner of Main St. and Celt Rd and across the street: 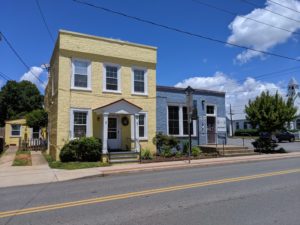 * Upgrades to several apartments for low- to moderate-income families on Ford Avenue.

*  Restoration of the William Mills House on the hill behind the library.  These before and after pictures show the dramatic improvements made to the historic house: 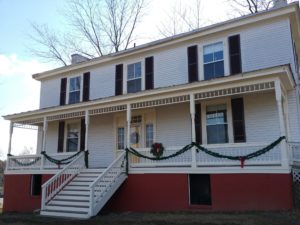 *STAR* is the official Project Manager to implement the Downtown Revitalization grant.  Final closeout of the grant will occur by August 2021.

Phase II of the Stanardsville Streetscape Enhancement project is funded in part by three grants awarded by VDOT under the MAP-21 Transportation Alternatives Program.  The grants total $918,000.  The project has been delayed for several reasons, but construction is now expected to begin in the fall of 2021.

STAR is facilitating implementation of the Phase II streetscape project.  The Town has contracted with the Thomas Jefferson Planning District Commission to serve as Project Manager and Draper Aden Associates to provide engineering services.  Both entities had the same roles for the Phase I streetscape improvements.

Specifically, Phase II extends the new sidewalk network in town by constructing a five-foot wide sidewalk west from Celt Road to connect with the existing sidewalk at Pioneer Bank, and east from Rectory Lane to the Greene Pharmacy entrance.  Both sidewalks will be on the north side of Main Street.  The project will also install 21 colonial-style street lights to match those installed in the center of town.  A pedestrian bridge across Mitchell Creek on the east will also be constructed. The required local match of $229,000 has been fulfilled thanks to generous contributions from the County EDA, the Town of Stanardsville, local businesses, foundations and individuals, and significant matching grant awards from the Perry Foundation.  However, because of increased construction costs, the Town has committed to providing an additional $226,000 to meet the current estimated project costs.

Phase I of the Streetscape Enhancement Project was completed in 2013. That VDOT-funded grant project has made the town more attractive and safer for pedestrians by replacing broken sidewalks, building safety crosswalks, and installing street lights, landscaped bump-outs, trees and other planting areas.

“Restoring its Vitality . . . Retaining its Charm . . . Helping its People”

*STAR*’s leadership is involved in a number of other activities with the goal of making the Stanardsville area a better place to live, work and raise a family.  In particular, its president, Don Pamenter, is actively engaged in efforts to promote business development and tourism in Greene County.  Executive Director Roy Dye serves as a member of the county’s Tourism Council and is a board member of several local community organizations.  Similarly, Stanardsville Mayor Gary Lowe is a valued member of the* STAR* Board of Directors and works closely with its leadership to achieve our common goals.